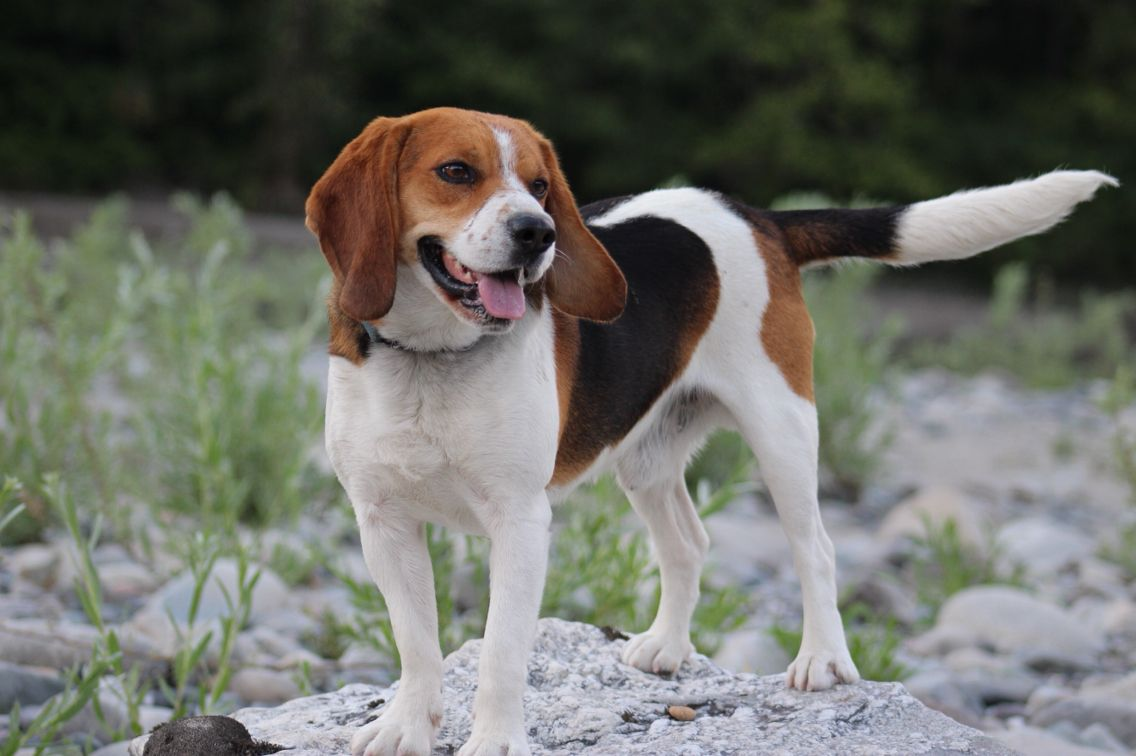 Fi Team
2 years ago • 4 min read
The link has been copied!

The expression tricolored relates to a dog whose coat consists of three different colors. More common in some breeds than others, we’ve listed 14 of our favorite tricolor dog breeds that you need to know about!

American Foxhounds are most commonly tricolored, but interestingly they can be any color! One of the rarer breeds found here, you’ll find they shed a lot, so it’s recommended to brush their fur each week.

Scent hounds that have been historically used for hunting, American Foxhounds have loud barks that carry great distances. While this is historically very useful for that part time, if you’re looking for a quieter partner the Foxhound may not be the one for you.

Naturally inquisitive and well known for their incredible sense of smell, Beagles can be found with many color variations. Most have two tones, however you will occasionally find a single toned Beagle. Many are tricolored, with the most common tri colored Beagle coloring being black, white and tan.

As the name suggests, these loyal pups originated from the Pembrokeshire region of Wales. Although their small size may suggest otherwise, they are originally herding dogs and have amassed global attention as a breed thanks to Queen Elizabeth II’s affection for them.

Tricolored Collies are very common, only behind black and white for the most popular coat variation. The snout is commonly white, and colored markings can be found across their body. This breed has a wide variety of potential coat variations, and if long-haired beware of the shedding!

Although most Basenjis are two-toned, some would say the most stunning of their color combinations would be those that are tricolored.

With a white chest and neck, a tricolored Basenji has a majority deep black body with brown eyebrows, cheeks, ears and on the inside of their legs. This is a short-haired breed that has evolved that way due to originating in warmer climates and hunting, where short hair would allow their fur not to catch on plants.

Known for stunning multi-color variations in their fluffy fur, Australian Shepherds have been called by some the chameleons of the dog world. A smart breed that can be trained to perform a variety of maneuvers, Australian Shepherds take joy from activity and require a pup parent with similar stamina!

Lively, fun-loving and affectionate towards their owners, it’s recommended to give your Australian Cattle Dog a lot of space to entertain their active lifestyle. As tricolors come, black tends to be the dominant color gene for this breed's coat, with accompanying brown and white markings throughout the face and body.

A breed that tends to skew towards single or two-toned coats, English Bulldogs can occasionally be tricolored. When they are, the base of their coat tends to be brown or white, with black spots on the face.

Inquisitive and sociable, these dogs are very loyal and will stick to your side through thick and thin!

A small breed that sure make up for it with personalities that vastly outweigh their size! Chihuahuas generally have a base brown coloring with tricolor complements of black and white.

A breed of medium height and racy build, Coonhound coats typically come in a tricolor tick pattern. Their head and ears are predominantly black, with tan markings typically appearing over their eyes, face and on their paws and lower parts of the leg.

The tick naming comes from the speckled look on parts of their coat, which actually comprises of black-colored hairs on a white backdrop.

A short-haired breed with a recognizable bark and a natural hunting instinct. These dogs like to roam so they require regular training and a large amount of exercise each day.

Entlebucher Mountain Dogs are one of the rarer breeds where the vast majority have a traditional tricolor coat pattern. Their chests are usually white, encapsulated by a black body with various tan markings in other areas.

A bigger breed that needs a large amount of daily exercise and stimulation, Entelbuchers are for more active dog parents. They are devoted, intellectual companions who can be taught a variety of tricks.

Used historically as farm dogs, they’re strong and one of the largest breeds of the bunch, standing at just under 30 inches tall. Faithful and devoted, Bernese Mountain Dogs are known for choosing one fortunate human to attach themselves to and stay by their side.

Ranked by the AKC as America’s 11th most popular dog breed, these lovable dogs are known for their fun-loving and big-hearted personalities.

Tricolored Boxers are primarily white or brown with black mouths and patches around their eyes.

Stunning and unique looking pups from the German Shepherd family, Panda Shepherds got their name from the black colored circles around their eyes - similar to a Panda’s!

You’ll notice their large ears are bigger than their German Shepherd counterparts, but their coat is more similar. With a thick fur coat, Panda Shepherds are known for shedding, and require large amounts of exercise each day from their owners.

We have all of these breeds and more on Fi! If you have one of these breeds, with Fi you can compare your pup’s activity to thousands of others of the same breed and learn how much activity your dog should be getting each day, as well as where they are at all times.